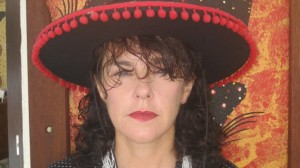 A Darwin refugee advocate, who has been running art projects for asylum seekers in detention centres, has died after her bicycle collided with a car.

Vikki Riley, 50, organised art workshops in Darwin to help asylum seekers as they waited for their cases to be processed.

She also helped refugees find jobs and accommodation once they had been released from detention.

Her husband Jimmy says she died today after being hit by a car on McMillans Road yesterday, while cycling to one of the detention centres.

He wants asylum seekers who worked with her to be allowed to attend her funeral, and to be released from detention permanently as a tribute to her work.

Officers from the Major Crash Investigation Section believe she was travelling against the flow of traffic when she was hit by a car.

“It is believed the man driving the vehicle attempted to brake and veer to avoid her, however was unable to prevent a collision with the victim,” Detective Acting Senior Sergeant John Worrall said.

“Indications at this stage are that the cyclist was not wearing a helmet at the time of the crash.

“While there are circumstances in the NT where cyclists are not required by law to wear a helmet, police would encourage all cyclists to wear one whenever they are riding.”

Police are continuing to investigate the cause of the crash and will file a report for the coroner.