Kabul Press: The Hazara diaspora is holding protests globally, asking the world to take action to Stop the genocide of the Hazara, those who are native of Hazaristan, where Afghans have invaded their land since the 19th century, and the name Afghanistan appeared in the maps. The demonstrations are alongside an ongoing Twitter storm using the hashtag #StopHazaraGenocide. So far, over six million tweets are using the hashtag. The protests are massive, and the Hazara cyberactivists and organizations could mobilize the Hazara diaspora. However, it was not the only surprise as the Hazara protesters raised their flag of Hazaristan, the flag presented on the cover of the poetry anthology Poems for the Hazara by 125 poets from 68 countries.

#ReverseEngineering Afghan oppression against the #Hazara of #Hazaristan, which is almost two hundred years old, is challenging and complicated but possible.
💛🤍💙 #StopHazaraGenocide pic.twitter.com/ZgUYbrxnkA

Article 37 of the Hazaristan charter, released in 2021, is about the Hazaristan flag. Article 37: Flag a) The flag of Hazaristan is a combination of three colors, yellow, white, and blue, in order from bottom to top. b) Yellow is the root and descent of the Hazara and from the color family of the Hazaristan mountains. c) White is purity and truth. It is in harmony with the winter of Hazaristan. Besides yellow and blue, it is one of the most used colors in the traditional Hazara dress. d) Blue is a symbol of work, development, and prosperity. It is the talent, ability, desire, and national concurrence of the Hazara. 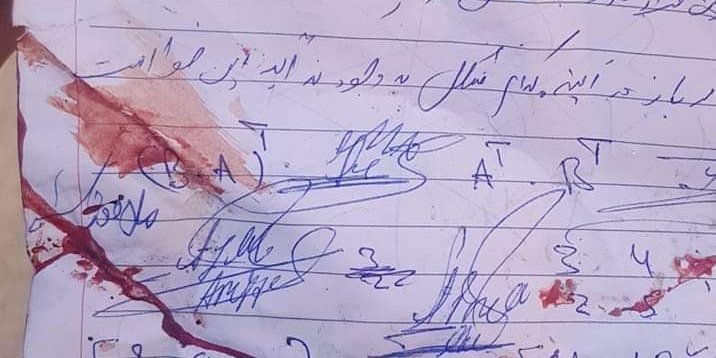